Sydney has a wide variety of habitats that suit a diverse range of frogs. Although our city region has nearly all been disturbed or greatly altered by humans, there are still over twenty different species of frogs that can be found in and around the city limits. This poster introduces you to most of them. Apart from the Red-crowned Toadlet, all these frogs are also found outside of the Sydney region. Seven are ground frogs that do not normally climb and don’t have discs on their fingers and toes, and the remainder are tree frogs, some of which are climbers and live in trees, the guttering and pipes around houses (or even toilets), and others which have adapted to living on the ground. Depending on their need to climb, they have larger or smaller discs on their fingers and toes.

Some frogs are threatened, such as the unique Red-crowned Toadlet known only from the Sydney Basin, and others are in decline as a result of habitat loss and/or a disease known as ‘chytrid’ (pronounced kitrid) fungus, which is specific to frogs and is sweeping through many populations around the world. Despite this, some frogs are still quite common, and although they may have come in contact with this fungus, they appear to be much less affected by it.

The four frogs you are most likely to see in gardens, bushland, or semi-rural areas where there are ponds or dams, are shown here in the top row of photographs. The first two are ground frogs and are the most likely to be the first to colonise a frog-friendly garden pond. The next two are tree frogs and like more bushy suburbs or semi-rural areas where there are trees and dams. 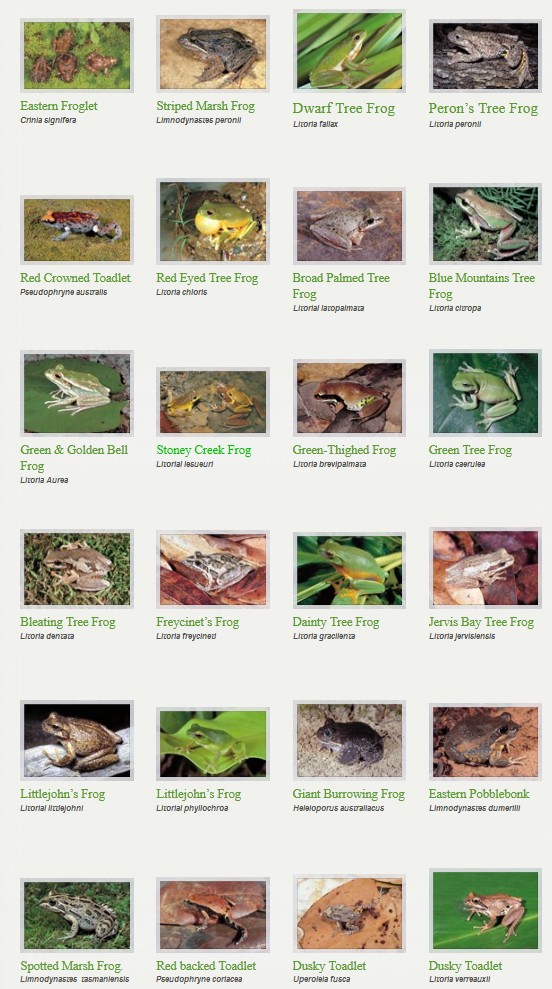